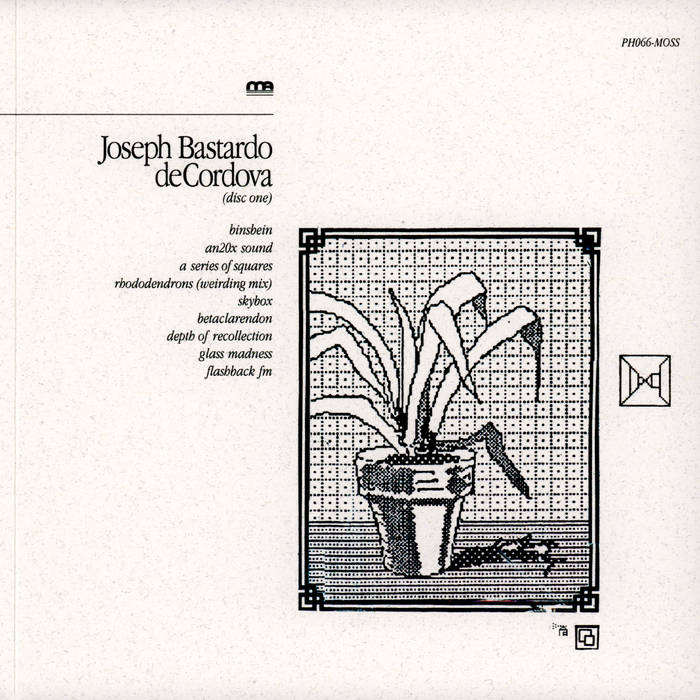 Originally released on cassette in 2016 by Phinery. This 2xCDr version was made shortly after to sell and give away exclusively at shows. It includes both the deCordova album on one disc and the remixes on another.

The remixes were originally presented as extra tracks tacked-on to the digital version of the album. Now both albums are presented on their own, with expanded artwork from Seamus R. Williams and layout by Joseph Bastardo. This is the definitive version of deCordova.

The work of Massachusetts noise artist Joseph Bastardo is characterized by its looseness, by its reluctance to adhere to any given standard of construction. Through the intermittent bleeps, bloops and static of his songs, he discovers that there are infinite worlds buried within the layers of his own work. Under each grainy electronic fissure and apoplectic synthetic expulsion lies an expansive landscape of half-formed revelations and musical detritus that clings to the deepest parts of your subconscious.

On “deCordova,” his latest collection of fractured artificiality, Bastardo keeps the flow of wired sounds and broken pop melodies intact, allowing for a natural evolution of his aesthetic that finds a perfect balance between his weightier material and that which flits around on the periphery of your attention. Electronic rhythms are torn down to their base elements before becoming fodder for the foundation of his skewed pop and synthetic architecture. And while the tone and tenure of these tracks vary from one moment to the next, through his conscious deployment of spatial arrangements, we’re left with a cohesive and mature perspective on the nature and possibilities inherent to such wired experimentalism.

All music by Joseph Bastardo.
Mastered by Karl Fousek